Thousands were shopping in mall Monday evening when gunfire was reported. 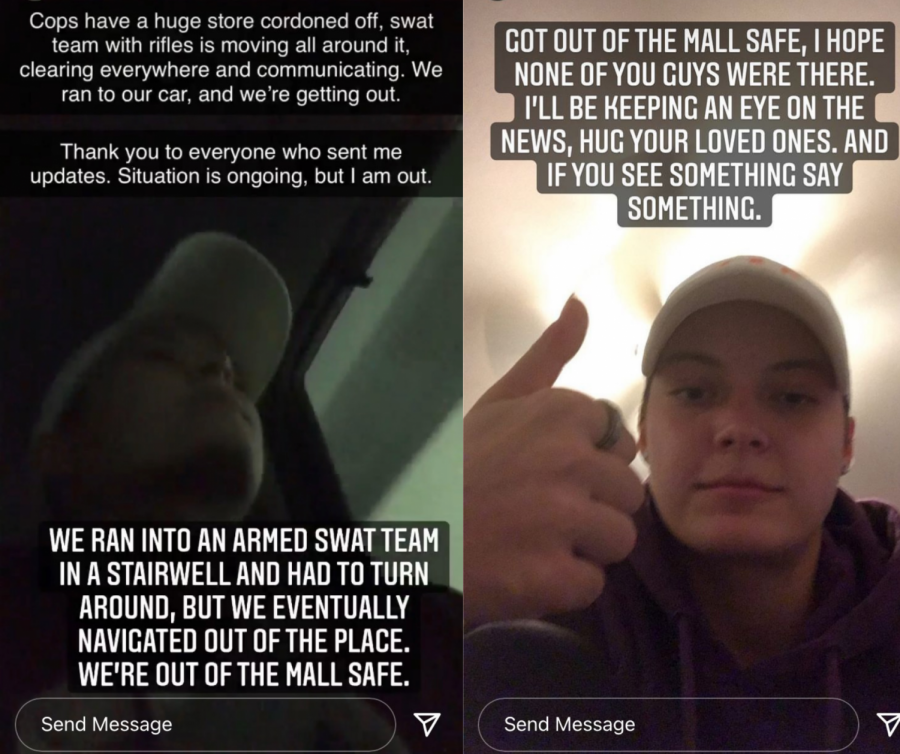 Screenshots from senior Nicole Platko's live updates on social media of her experience as her family sheltered in place in Oakridge Mall on Dec. 20, 2021.

Multiple news outlets say that both the victim and the shooter have not been found.

Both students are safe and captured their nearly two-and-a-half-hour ordeal on social media. Still, the shooting, which closed down freeway exits to Santa Teresa and Almaden Expressway, hit close to home.

“I just couldn’t really process anything,” Hernandez told the Bear Witness. “It didn’t feel real. I never expected something like this to happen to me or anybody.”

Hernandez and her mom had just stepped out of the Macy’s store to grab boba when they saw crowds running through the mall.

“When I saw older people, like adults running, that’s when I knew something wasn’t right,” she said.

Hernandez and her mom took shelter at a nearby store where they sat for two-and-a-half hours while police searched the area. While they waited, she tried to calm her mother down. Another had a panic attack, and those hiding with her were trying to quiet down a baby whose mother was stuck in another store.

People around her were dialing their significant others to tell them that they loved them.

In a nearby restaurant, Nicole Platko, her mother and brother Nathan sheltered in place at a nearby restaurant When she reached out to a mentor of hers from the San Jose Police Department via text, he told her there was an active shooter in the mall.

“My stomach just dropped,” she said. “I was just terrified. I’ve never been in something like this.”

While sheltering, the restaurant turned off its lights, and Platko said waiters occasionally walked around to give patrons updates on the situation.

She had a clear view of the parking lot and of people running to their cars. Soon, it was filled with about 100 police cars illuminating the area in red and blue.

When given the all-clear to exit the premises, she and her family zig-zagged to their vehicle, and encountered SWAT members with their guns drawn clearing the stairwell.

She said it wasn’t until she was in her car driving away that she felt a sense of relief.

Reflecting on the event

It’s only been a day, but the ordeal has left both Platko and Hernandez with much to process. Because Hernandez heard rumors that the shooter hid his rifle in a backpack,

“I get worried because I never know what’s inside of the backpack.”

For the immediate future, neither of them plans to be near a mall.

“I already have a lot of anxiety going to malls, because there’s a lot of people and I personally don’t like crowded spaces,” Hernandez said. “I think my anxiety grew because of (the mall shooting).”

Platko said the parallels between Oakridge Mall and Branham are apparent, likening the crowded corridors of the mall to the crowded hallways at school, like “shooting fish in a barrel,” she said.

“If they’re gonna shoot up a mall, why wouldn’t they shoot up a school?” Platko said.

She is encouraging students to constantly be aware of their safety and the safety of others.

“If you see something, say something,” she said. “II you think somebody is planning to shoot up a place, don’t take it as a joke and record it and put yourself or others in danger. Be grateful that you’re alive and happy and healthy.”