Vedant Patel, who graduated from Branham in 2008, will work as an assistant press secretary 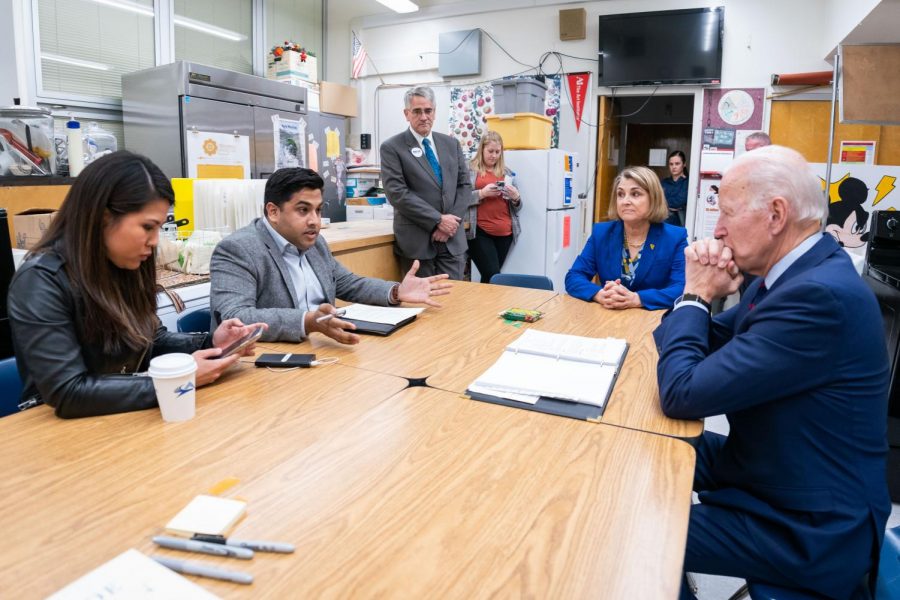 Courtesy of Biden for President

Patel, second from left, and his colleges discussing an interview with Biden in Reno, Nevada in January 2020 (courtesy of Biden for President).

Immediately after Branham alumnus Vedant Patel heard he would be working as an assistant press secretary for the Biden-Harris administration, he texted his high school teachers.

English teacher Nancy Freschi was a part of the group Patel reached out to. She was Patel’s journalism adviser and said she knew that he was destined to do great things.

“In journalism, he was so mature and so determined and focused,” she said.

As a member of the press team, he will communicate with the press and ensure that accurate information is shared about the administration.

Patel, who graduated in 2008, wrote stories for the Bear Witness and organized school events with ASB. He credits his passion for politics to his time at Branham when as a junior he got the opportunity to work on former Congressman Mike Honda’s student advisory board as a school representative.

As he neared graduation from UC Riverside in 2012, he thought he wanted to be a pediatrician. Unsatisfied with his scores on the MCAT (he took it four times), the standard medical school entrance test, he was pushed to reflect on what he truly gravitated toward.

“The impact that Branham had on me was more subconscious than conscious,” he said, “because if you had spoken to me in high school, if you’d asked me what I wanted to be when I grew up, I would have, without missing a beat, said, ‘I wanted to be a doctor.’”

But from his work for multiple political campaigns at UCR to his time with Honda, he knew he had a knack for public service. Visiting his teachers at Branham, which included Freschi, gave him clarity on his future.

“He loved journalism, he loved news, he loved politics,” said Freschi recalling her visit with Patel. “I feel like that was something that registered for him and stayed with him, even when he was looking for his other path. I think that kind of helped.”

As an immigrant from Gujarat, India who moved to the South Bay in 1991, Patel said careers involving government and politics seemed to be out of the question.

Government teacher John Salberg said that Patel was curious about civics, and would participate in class debates, but was the one who would keep everyone grounded and the discussion on track.

“He asked a lot of questions, and he would stay after class and talk,” he said.

Science teacher Juan Fernandez, who had Patel in his Chemistry Honors and AP Biology classes, said that his character, more than his grades, was what stood out to him.

“He’s always been a very kind person that worries about other people, more than actually worrying about himself,” he said. “I see it (his career) as a move to try to help serve American people.”

After working in government press positions for politicians such as congresspeople Mike Honda and Pramila Jayapal as well as the Democratic National Committee, Patel realized that working for Biden was driven by a personal and professional connection. Patel’s mother passed away in 2015, months apart from Biden’s loss of his son, Beau.

“I immediately connected the dots and saw him as somebody who I was looking up to,” Patel said. “I was seeing him get back into the swing of being Vice President and doing all the things that job entails, seamlessly with so much conviction and so much energy, without losing a beat.

“(From) then on I’ve thought of myself as a Biden guy,” he continued, “and somebody who just really loved everything that he stood for and everything he championed.”

Freschi knows that Patel’s curiosity and drive will show through in his help to the administration and that he deserved the honor.

“It couldn’t happen to a better person,” she said. “It makes me feel like we’re in good hands as a country if that’s the kind of person that’s getting hired in the White House.”