They didn’t quit their day job

From painting to rock bands, teachers nurture their hobbies 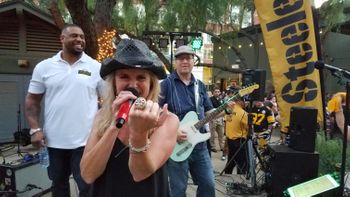 Social science teacher Michael Dickey’s original oil paintings sometimes sell for over $2,000, a fact that he says most students are unaware of.

This is intentional, as said he separates his teaching career from his outside passion.

“Ninety-nine percent of the students have no clue,” he said. “And the reason is that I just purposely just don’t tell about that part of me.”

His painting mainly tell the stories of people he has encountered who have endured hardship. For example, a painting of an old woman, who is a friend of a friend, showcases the haunting look in her eye.

Dickey said he was involved in advanced art classes throughout high school, and today, he sells oil paintings. He has recently mastered tattoo art. He loves his job as a teacher, but art offers a different sense of joy.

“I enjoy the independence and being able to isolate myself. It’s cathartic in a way,” he said.

Dickey’s way of keeping his art to himself contrasts with how English teacher Tobie Schweizer shared her passions.

On the first day of school, her “About Me” presentation included a photo of her flashing a Pittsburgh Steelers Super Bowl ring at a recent singing gig with her rock cover band “Sound Decision,”

Her favorite song to sing is “Zombie” by the Cranberries, but her repertoire also includes “Sweet Caroline” by Neil Diamond to “Locked Out of Heaven” by Bruno Mars.

To connect with students, she feels that it’s important to share her most proud moments on stage, such as her performance for the Steelers.

in some ways,” she said,  And (her singing) is such a big part of my life and sometimes I share it.”

Like Schweizer, Spanish teacher Erica Márquez is eager to share her art with the entire Branham community. She found her talent for art at a very young age, which did not go unnoticed by everyone around her.

“I was that girl in the class everybody would go to saying ‘How can you draw that? You’re so little,’” she said.

Márquez has taught art classes for victims of human trafficking since 2006 along with several other advocates for the nonprofit Community Solutions based in Gilroy. The program provides a safe space for victims to heal after enduring harm for long stretches of time, and Márquez believes it is important to aid these women in their journey to healing.

“I see these advocates as butterflies who go and touch each victim who for me are the flowers,” she said. “And when they touch these victims, they give them the power and the information that they need to be able to grow and become these strong women.”

Like many artists, Dickey struggled with confidence, but years of experience taught him a valuable lesson.

“It took me a while to even get the confidence to kind of display my artwork in public and do gallery shows and stuff like that,” he said.

Schweizer also battled confidence issues as a young singer and thought that she was not good enough.

Like Dickey, she grew as an artist and is now proud of her performing abilities.

“As the years have gone on, I’ve gotten more and more confident with my experience,” she said. “And so I’ve gotten much better.”

In the end, Schweizer had her breakthrough moment when she heard her song with her college band “Pitch Ya” on the radio.

“That was probably one of the coolest moments of my life,” she said.

Márquez’s moment will come when she makes her debut at an art show in Palo Alto titled “Ama la Tierra,” meaning love the Earth. She has invited the Branham community to attend.

“I think promoting to love our Earth is something that is very helpful for everyone to be aware of,” she said.

Dickey’s breakthrough came after having the courage to display his art, and he now uses what he learned as advice to other artists.

“Trust your instinct and have confidence in your expression and your ability to see what’s beautiful,” he said.