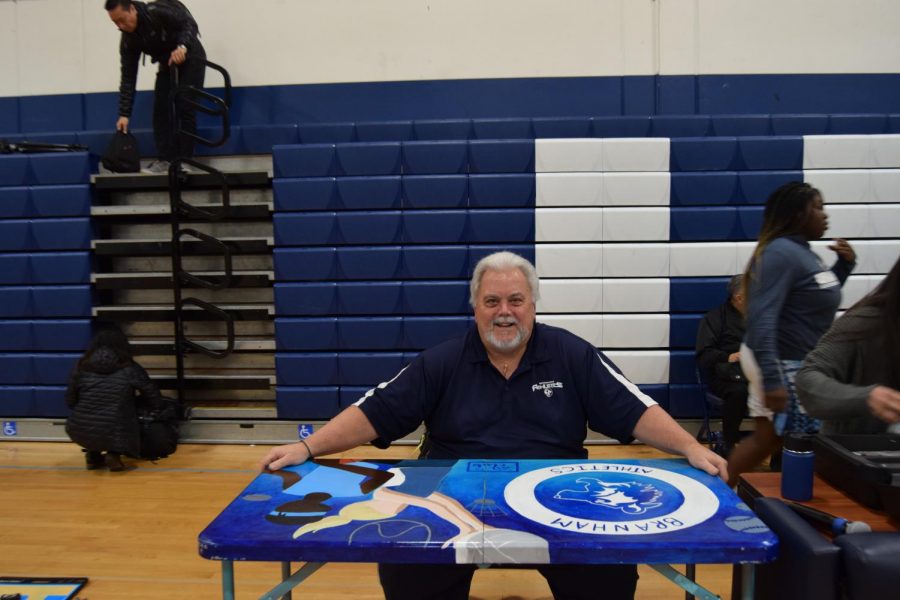 Announcer Bob Holmes said he had wanted to spruce up his standard folding table, and reached out to Branham's Art Club.

Known as the “The Voice of the Bruins,” Holmes has been a steady presence at Branham football, volleyball and basketball games for more than 20 years, but he decided recently that his ancient gray table was due for a makeover.

So, Holmes reached out to the Art Club, which stepped up enthusiastically to collaborate with him and to bring his vision to life.

“We used [the table] during volleyball season,” Holmes said. “It’s so plain.”

He asked the Art Club to bring into play the Branham school colors and logo. But the club went a step beyond that. Supervised by club president Chantal Wang and visual arts teacher Jessica Bender, the improvements will include audio-visual elements, such as music clips that will play after Bruin scores.

The Art Club was passionate about pitching in, especially given that Holmes is an unpaid volunteer who gives generously of his time and effort.

“He was really happy about us painting the table,” Wang said.

Holmes is eager to see the results of the makeover, a work in progress that’s slated to be unveiled after winter break, at the first basketball game of the season. He believes the table will reflect his pride in the Branham community and help to inject a measure of Bruin spirit into his popular game calls.

“Branham is a beautiful place to be,” he said. “So many people want to collaborate as a community—not just separate entities doing their own thing but coming together for a common goal.”