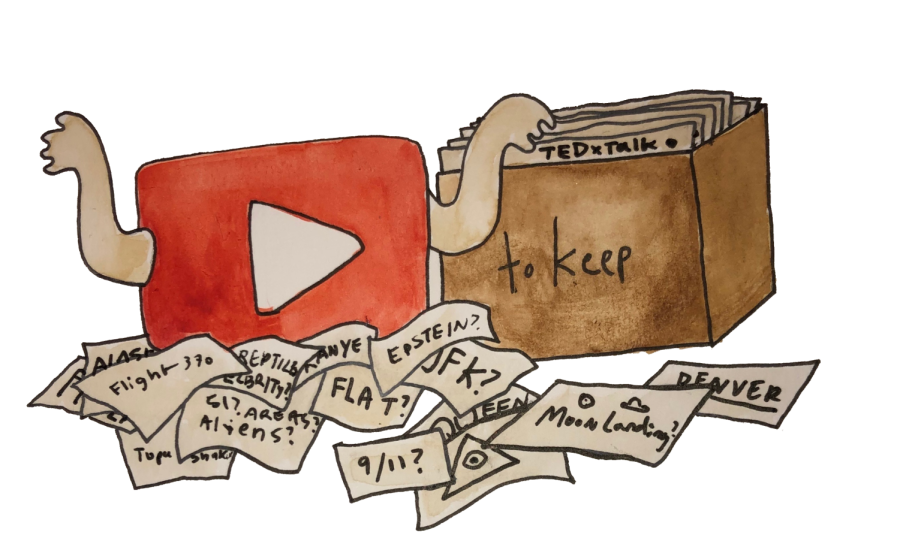 Senior Payton Sample uses YouTube to help him study for his pre-calculus class. He looks for well-known channels that can help him learn concepts such as factoring polynomials.

He is often impressed by the vast amount of content offering math help.

“There’s actually a lot of information,” he said. “They have so many different professors and channels to utilize.”

YouTube estimates that 300 hours of video are uploaded every minute and almost 5 billion videos are watched every day. In total, there are approximately 1.3 billion YouTube users. YouTube is an enormous platform, largely because anyone can upload to the website. But with no standard or requirement for accuracy, how much of the content on YouTube is actually factual?

Social scientist Joachim Allgaier analyzed the top 200 videos on YouTube about climate change. Out of the 200 videos, 111 were not backed by science or promoted conspiracy theories such as chemtrailing, a belief that the government is spreading toxic chemicals via airplane condensation trails. With this in mind, users must be wary when looking at information regarding current events.

“We saw things like with the Russian hacking in the last election,” said social science teacher Brett Johanson, referring to the alleged foreign involvement in the 2016 presidential election. “Some of these things sound like they’re coming through reliable or reputable sources, but they’re not.”

This can be a challenge for students such as Sample, who want to practice with YouTube, and trust that the content they’re viewing is correct.

“It’s easy to find a lot of things out there that are not accurate,” Ozdinski said. “Hopefully we as teachers are teaching students to critically think about their sources on a regular basis.”

Outside of academics, many students use YouTube on a daily basis. According to a survey by the Pew Research Center, 85% of teenagers age 13-17 use the platform. Johanson wants students to be active in verifying what they see online. He compares it to “defensive driving.”

“You kind of assume that it’s false until you prove it otherwise,” he said.

Johanson suggests that students check the sources to verify the credibility of a YouTube video, even though that is easier said than done.

According to Georgetown University Library, steps students should take to evaluate resources include identifying the author and creator and their credentials, finding the purpose behind the content, and recognizing if its perspective is objective and impartial.

Examples of verified sources include publications such as CBS News and USA Today, as well as websites like Encyclopedia Briticanna and Wikipedia.

“Any kid has just got to go through that same process,” Johanson said. “And it’s not getting any easier.”