Brandi Chastain shares one of her defining moments, and her role in advocating for girls 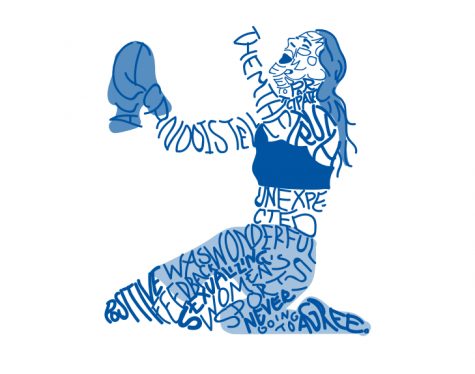 It was called the bra seen around the world. In 1999, moments after scoring the decisive fifth penalty kick against China in the Women’s World Cup, Brandi Chastain removed her jersey, twirled it around, and fell to her knees in celebration. It was perhaps the most memorable moment in women’s soccer history. Chastain had put the U.S. Women’s National Team in the spotlight, where it has remained dominant like no other team, through controversy and success. The Bear Witness sat down with Chastain to talk about the rise of women in sports, the most recent World Cup and the double standards that she feels still exist in sports today. And, of course, her career-defining goal.

Note: The 40-minute interview has been
edited for length and content. A transcript of
the interview is available on the Bear Witness website.

ON SCORING HER WINNING PENALTY KICK
Bear Witness: What was your goal in 1999 like?

Brandi Chastain: I just think about the moment as a great opportunity to con- tribute to the outcome. I get a lot of
questions about “Were you nervous?” obviously, you know, in a big moment like that you would be nervous, but we had done a lot of practicing already. I had actually missed a penalty earlier in the year against China against the same goalkeeper, so I think that that moment actually set me up for greater success in the World Cup because I knew what it was like to miss it.  I knew I had done a lot of practicing between that time and the final. The only difference was that in that moment, the coach had asked me to take it with my left foot, which I had never done before. I had never done it in a game, but I had practiced it a lot during practice, so I felt very comfort- able. And then I think, what you try to do in  those moments is you just try to breathe and not think. The kick is no different than any other practice kick.  The distances are the same. You know, the obstacle is getting it past the goal- keeper, but in terms of the technique, and whether or not you can do it, you know you can. So, it’s just believing in yourself in the moment.

ON HER FAMOUS CELEBRATION
BW: In previous interviews, you mentioned that your celebration was reactionary, how true is that?

BC: It was completely organic. Think about the whole day, for us, when we got to the Rose Bowl. We’re thinking “We’re going to the World Cup final!” You get to the locker room, you put your stuff down, everybody kind of has their rituals that they go through. Some are superstitious, some are just doing the things that we do, some are in the middle of  random acts of dancing, or just getting ready. It’s your biggest game you’ve ever played in your life, it’s 90,000 plus people, and you don’t even get to go out onto the field. We’re running in the tunnel, we’re running in circles in the locker room, we’ve got the music on, we’re laughing and high-fiving, and it’s not typical to the situation. You don’t get to be in the World Cup that often. So I don’t think you can really prepare for thinking that you’re going to score the winning goal. And what would you do if you did that, especially in my case, since I my primary position is defender. So it was organic, 100%. I watched soccer my whole life. So, you know, maybe that moment was at the back of my head, as I’ve seen it before, but had never done it before. It just felt like the right moment, I guess.

POSITIVE REACTIONS
BW: What was the backlash you received like?

BC: There was probably 95%, this is an approximation, positive responses. There’s always going to be somebody who’s going to disagree with what you do, or you say, or just don’t see things the same way as you do. But I learned fairly quickly that those are really great opportunities for conversations. You know, I had a chance to really bring more fans tosoccer with those conversations, “Why did you do that? You’ve sexualized women’s sports, you’ve ruined it for our
daughters. It’s embarrassing.”

BW: Was there anything about the backlash that surprised you?

BC: Mostly what surprised me is the amount of attention it got in general. The amount of positive feedback it got was
wonderful. Whether it was from women who never felt empowered to participate in sports, from men who were trying
to be encouraged to go to the gym, two couples who had met while watching the game together, and then got married, or daughters that went to the games with their dad for the first time.

ON FINDING HER PASSION

Page 09 – SportsBW: How and when did you realize that this was what you wanted to do?

BC: I was about 11 when the 1980 hockey team was playing in the Olympics, and they beat Russia in the semi final, to go to the gold medal match. When the USA men’s hockey team won the gold medal, the captain, Michael O’Neill, stepped up onto the platform to receive the medal. He was holding the American flag, and as the captain, he was the only one that was supposed to go up there because the podium wasn’t very big. Then he called his teammates up. I remember as a kid, I was watching it live thinking, I want to do that. I didn’t want to play hockey, but I wanted to feel that feeling that I was getting just through the TV. Like, I wanted to feel that sensation of being victorious in that  moment. And especially with representing the red, white and blue. The women’s national team didn’t exist. When I said, I want to do that, I had no idea how that would ever be real. But it just hit me really hard and very strongly. And I thought: that’s passion. That was the first time I think I really understood what passion was.

ALEX MORGAN’S TEACUP CELEBRATION IN THE 2019 WORLD CUP
BW: What did you think about Alex Morgan’s celebration in the game against England in the last World Cup?

BC: I didn’t see it happen live, so I don’t have a real initial reaction to it. Then I saw the picture. I was thinking, what’s that all about? Because I know they played England and I was think- ing, ‘Hmm, that’s a little interesting.’ My first response was when I did see it was “Probably not a good idea.” Then when I heard her comment, I thought about it again. I thought, you know, I don’t feel like we can censor genuine, celebratory moments. Preconceived, setup props, you can judge that all you want, because that’s premeditated, right? You’ve already decided that you’re going to do this thing no matter what.

CULTURE OF BOYS AND GIRLS SOCCER
BW: As someone who’s still really involved in the soccer world, have you noticed any difference in treatment between boys and girls at a young, elementary level in sports?

BC: Well, I still have to, you know, I still advocate for my girls every day. You know [at the soccer club I coach at], the
boys got to play on the soccer field, and the girls were playing on the football field. And week after week, I noticed it.
I had to go to the director and say, “Hey, what’s happening? This is not right.”
If we’re playing at the same time, we should switch fields. And that should be normal. Then when somebody says, “We don’t really see that happening. There’s no discrimination.”
I say, “You don’t understand discrimination because it’s not happening to you. You don’t really see it.”