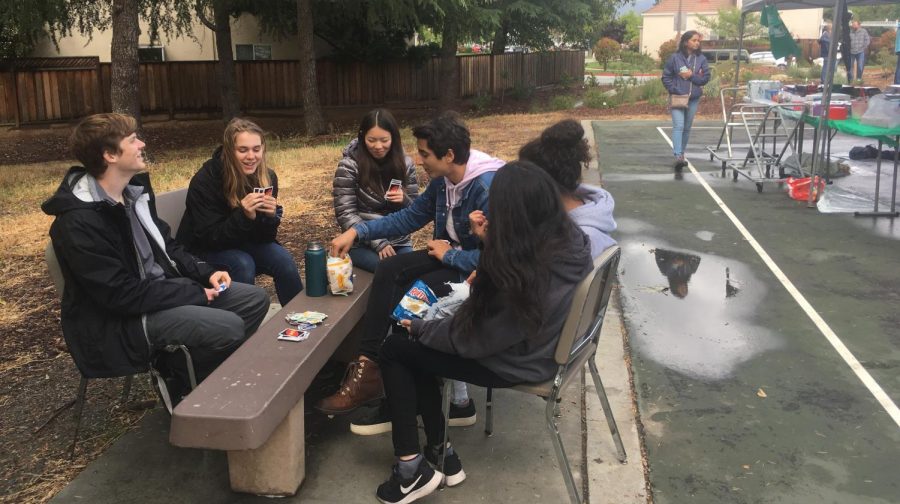 Attendees of the festival eat snacks and play games at Branham Park. SPARE is one the clubs ASB leaders say are making a bigger impact on campus.

The 70 new clubs and renewals registered for the 2019-2020 school year have set a record for Branham.

Activities Director Christina Hillman credits to the implementation of the tier system, which prioritizes club involvement.

In 2017 and 2018, the school registered 30 and 40 clubs, respectively. With the several dozen signed up, Hillman said this is a sign that clubs have been more prominent on campus, which indicate an improved school community.

“The more we can foster their growth and help support them, the better the campus culture becomes,” Hillman said. “The idea is that everyone finds a club they’re passionate about.”

This is also the first year that clubs have received grants through ASB, which were built into the tier system.

The program designates three levels of involvement, from those with an active and large membership to those who meet casually.

Hillman estimates that ASB has granted over $1,000 worth of grants to clubs this year. Clubs that had regular membership over 15 members are eligible to apply for grants of $100 and those with 25 regular members can apply for $200.

In past years, clubs were required to turn in meeting notes and sign-ins and maintain at least five members, but for the clubs that did not, there were little repercussions. ASB Vice President and senior Kylie Delaney believes that this has held clubs more accountable and incentivized them to meet requirements.

For Delaney, this process started earlier last school year when teachers and students collaborated as part of the Student Culture focus team. The group created and implemented the tier system, which Delaney cites a source of inspiration for bettering and normalizing the club infrastructure on campus.

“[We had to] talk about what was actually realistic in terms of how we could help clubs, and then just work backwards to say five members is normal,” she said. “We had to establish the normal patterns that we should expect.”

As a result of the system, Hillman and Delaney credit many “small successes.” For Hillman, this includes Key Club holding successful blood drives with high participation and Ultimate Frisbee Club having more frequent practices than last year and even holding scrimmages. To Delaney the “big win” was giving each club their respective bank account number for easier financial access.

One of the main reasons the tier system was implemented was to bring Branham’s clubs up to the standard set for clubs by California. According to Hillman, all clubs will never be 100% within regulation, but there have been massive improvements this year, especially with paperwork like purchase orders.

“There’s still a lot of clubs who don’t consistently take minutes, but for the bigger things, for example, the financial paperwork, I think that has really greatly improved this year,” she said.

Next year,  junior Aiden Velasquez, ASB Vice President-elect, will be in charge of managing clubs, along with other executive responsibilities. He has embraced the tier system and believes that clubs that successfully fulfill the requirements, like SPARE and Acoustic Club, add value to Branham.

“People who are involved with the clubs and keeping up all of the requirements, even above and beyond — it kind of just builds up the community,” Velasquez said.

He has been shadowing Delaney during the last months of Leadership in order to prepare for the upcoming school year and pass on knowledge. They have already set up a Google Classroom for club presidents to turn in attendance and minutes, as well as have digital access to financial documents for the first time.

“I would check up with [clubs] with their goals and encourage them to continuously improve, to reach the level that they wish to,” he said.

“I’m hoping that there are more clubs because people actually want to be on campus and want to be invested in our Branham community,” she said.