Sophomore Madison Leong is part of a popular Bay Area K-Pop dance group. After appearing in a Korean dance show, her fame may be taking flight. 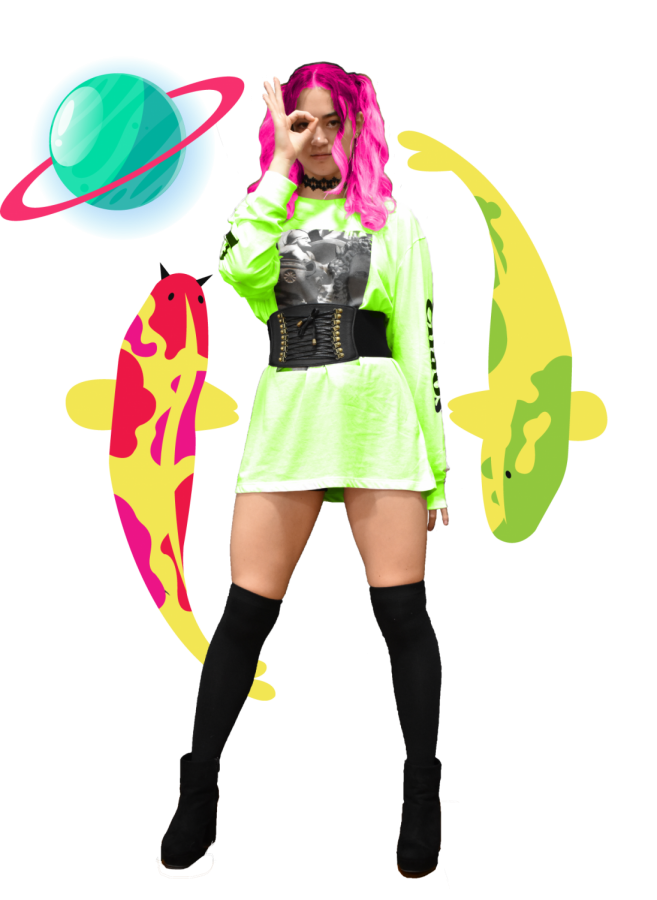 Walking between sets, stagehands touched up her makeup. Dozens of cameras filmed her throughout the day. A live studio audience cheered for her and the four other U.S. dancers.

Sophomore Madison Leong competed in a K-Pop dance cover competition called Stage K , put on by the Korean broadcasting network JTBC in March in South Korea. Teams were divided by country and judged by a live studio audience and a judge’s panel made up of idols from internationally famous K-Pop groups Red Velvet and iKon.

For Leong, the experience started in January after her cover dance group Eclipse was invited directly to the second round of auditions in Los Angeles. They got to skip the initial video submission stage of the competition.

“They called out specific videos, that Madi and Amber [another member of Eclipse] were in for us to prepare,” Lena Mier, one of the group’s directors, said. “And we thought if they’re going to just have us on there, then let’s do it.”

From the beginning, it seemed as if Leong had a good chance of moving to the international, televised level of the competition. Her group was asked to participate in the competition by the broadcast company over social media and eventually email. This became even more clear on location in LA.

“I knew I had better chances because they kept asking me to do more,” Leong said. “They had me do a solo cover and they did more interview clips. They filmed all of these clips of our day.”

During the audition members of the group had to wear numbers on their shirts and danced three covers from popular idol groups they were asked to prepare beforehand in front of a panel of executives from the broadcast company. Every moment was filmed by numerous cameras from the warm up, the audition itself and confessional style videos throughout the process.

“There were just a bunch of cameras. Cameras up on the walls, people with cameras just kind of roaming around,” Mier said. “There was one camera that was always on us or Madi.”

After all of the solo and group auditions, there was also a random dance play portion. The event organizers played random K-Pop songs and everyone who knew the choreography to the songs danced in the center. According to Mier, Leong excelled at this because of her vast knowledge of choreography and high level of execution.

“It was was really fun to see her going up there and dominating the floor,” Mier said. “She’s very competent which is beautiful to see.”

After auditions with all the groups at the LA location, the members of Eclipse were taken to the Hollywood Walk of Fame. The group did one cover together and Leong did another solo cover, which were both filmed by the JTBC camera crew. Afterwards, Leong and her co-member Amber Wollum were notified that they’d be two of the five U.S. representatives, with Leong being the number one pick from the LA audition.

In March Leong flew with her dad and his girlfriend to South Korea, where she stayed in her own hotel. She had never been out of the country before, but she didn’t get to experience much of Korea because she mainly saw the airport, hotel and studio.

“She probably didn’t get the chance to get over the jetlag,” Dave Leong, her dad said. “She was non-stop when she got there.”

Each team in the competition had two days to practice the choreography of three different assigned songs. Larger groups, like the U.S., had the advantage of taking up more space on stage, but it was easier for smaller groups like Canada and France to synchronize with only one or two people on their teams.

Leong was more nervous for others than herself because she knew her team members’ weak spots, especially with synchronization because the team had not known each other prior to the competition.

“I focused mostly on head angles,” she said. “I’d go through the whole thing and say that this part your head goes up and then to the side or whatever it may be to make sure everybody has the right angle.”

Janice Elzinga, the dancer’s father’s girlfriend, took in the experience when seeing her perform microphoned and in full costume and makeup.

“The broadcasting company brought us to come and watch the show, so we rode in a van,” Elzinga said. “As soon as we get out the car to walk into the building, we had film crews like taping us and in our face and I think it was just a little glimpse of what Madi had gone through the whole week.”

Throughout the competition, Leong had the opportunity to reflect on what had brought her to Korea: her team.

“This [Eclipse] is a part of my life every day, especially the people. You think it’s just a dance team, it’s not,” she said. “I cried four times on the show because I was talking about them.”

Leong first joined Eclipse last June, after seeing a cover they posted on YouTube at the San Jose Convention Center. She had experience in cheer and hip hop beforehand and wanted to join a K-Pop cover group after going to KCON LA.

Leong joined at 15, well under the age of the other members of the group and with less experience.

“At first it was really scary,” she said. “I didn’t know if I could do this, like be on the same level as these people.”

Despite her nerves, other members of the group were excited by her dance skills and attitude. Amidst the other people auditioning, she stood out.

“I actually remember the day that she came in to audition. I noticed her right away,” Mier said. “I remember going up to her during a break and talking to her, being like ‘Hey, nice to meet you, you’re really talented.”

For the members of Eclipse, her dance persona contrasts with her personality.

“It’s very funny because you see her when she performs and she’s very aggressive, high confidence and with a lot of energy,” Mier said. “Then she gets off camera, and she’s the sweetest little bean.”

“I can’t really feel famous because it’s not like a YouTuber where they get 100,000 views and people recognize them,” Leong said. “It’s more of a team effort.”

Leong has said she has been recognized though, mostly online. When she comments on other cover groups or soloists’ social media, she often gets recognized or pointed out as “Madi from Eclipse.” From her participation in Stage K, members of the audiences took fan cams of her where she was recognized and posted about.

For Leong and other members of Eclipse though, the goal of the group is not fame. The group originally started as a pastime and a form of community for a group of Stanford students. Many of the current members work in tech, so the group serves as their creative outlet.

The anatomy of the group encouraged Leong’s father to be more comfortable with her going the group, despite being much younger than the group mainly made up of twenty-somethings.

“With ex-Stanford students it was not only a great group for Madi to be involved in, they’re nice people who have jobs and are great role models for her,” Dave Leong said.

Now the group has expanded, but for many of the members, the original purpose still remains.