Racist practice made its way into ’87 book 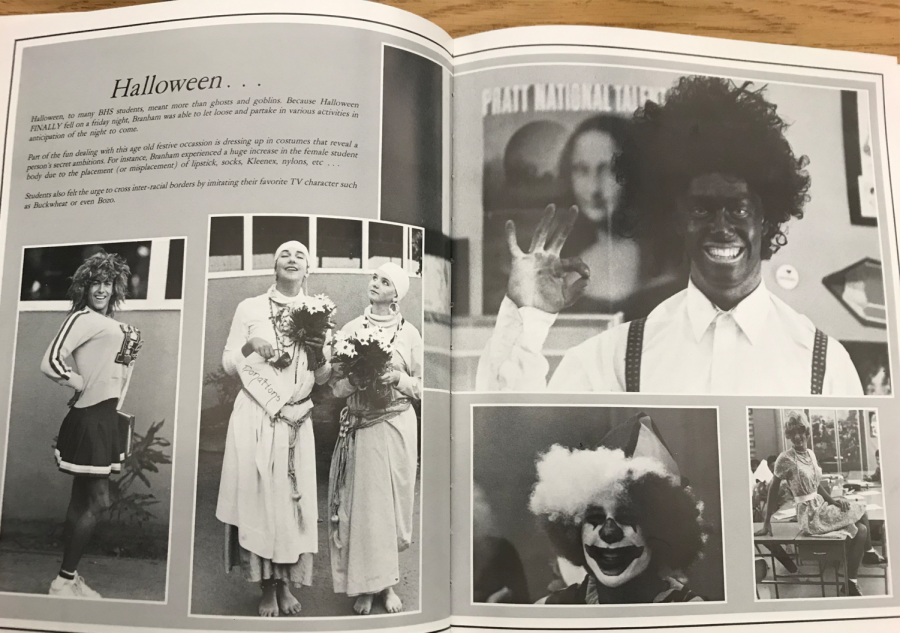 The Halloween spread in the 1987 Ursa Major yearbook featured a prominent photo of a student in blackface.

Branham’s 1987 Halloween yearbook prominently features a student wearing blackface to impersonate Buckwheat, a character from the children’s show “Little Rascals.” The photo was discovered by Bear Witness staff during their research for the school’s 50th anniversary issue last year.
The discovery has upset students leaders on campus, including the current yearbook editor and a Black Student Union officer. Alumni from the time, including the 1987 edition’s yearbook editor, have expressed disappointment in the photo’s inclusion.
Yearbooks, annual scholastic time capsules, have been in the news recently. Most recently in February, when the Washington Post obtained a page from Virginia Gov. Ralph Northam’s medical school yearbook that featured an image of two students, one in blackface and another in a KKK hood. While Northam said he was not in the picture, he admitted to wearing blackface on a separate occasion to impersonate Michael Jackson.
Ken Geisick, the Ursa Major yearbook editor-in-chief at the time, said that he couldn’t recall the picture, which was the dominant photo in the yearbook’s two-page holiday spread. In an interview, he said that he is disappointed that the photo was published. He blamed it on the lack of diversity on campus.
“The culture has changed in a dramatic and very positive way,” Geisick said. “We didn’t have the proper level of sensitivity to understand how this might affect students of different ethnicities.”
Geisick said he does however remember other troubling racist activities at Branham. ASB had a tradition of holding mock slave auctions on campus to celebrate student birthdays and to fundraise, where winners would have another student serve as a “slave for the day.” The mock auctions stopped around 1985, according to Geisick.
Lashone Jackson, who graduated Branham in 1988, said he was one of about 10 African-American students on campus at the time, though he felt that he never experienced racism on campus.
“To tell the truth, I think really, in the 80s my experience—I probably experience more racism in 2019,” he said.
Jackson did not recall the ‘87 yearbook’s blackface picture and was shocked by it, but he blames a lack of education for its publication. However, he believes remembering events like this and having discussions about them can prevent further mistakes in the future.
“Looking back on things that we went through—blackface at Branham High School—and these interviews, putting out papers, awareness and education make it so that you don’t have to even worry about that [a harmful lack of education] in the future,” Jackson said.
Sophomore Sophia Nonga, the events coordinator of the Black Student Union was said she surprised and disgusted by the yearbook picture, and that it had been published. She said that it shows that the photo had gone through the editorial process, and was approved by someone at each step.
“It meant that multiple people had saw it and they still chose to put it inside the yearbook,” she said.
Nonga said she was shocked that this picture was published in 1987, nearly decades after the Civil Rights movement brought racial equality to the national conversation. She speculated that students involved in wearing, photographing and laying out the page must have understood the unacceptable nature of wearing blackface.
Though she initially laughed at the blackface photo, Nonga, the BSU official, said that the photo ignores the history of black discrimination in the United States.
“They have no respect for the past and what African Americans have been through,” said Nonga. “They probably thought it was funny, but it wasn’t.”
The photos also shocked senior Hana Tzou, the current yearbook editor. said the class has strict content guidelines the yearbook must follow, including everything that may raise a red flag must go through the Jessica Bender, the adviser, and Principal Cheryl Lawton. All staff members had a discussion about appropriate content at the beginning of the year before they began designing the upcoming book.
During this discussion, staffers found a picture of a student dressed as a homeless person that was published in a previous yearbook.
“We showed this to the whole class and said this is not something that’s going in our yearbook because it could hurt this person later on and doesn’t showcase our school in the best light,” she said.
Now the yearbook has general guidelines for content in order to present Branham in the best light. For example, despite many senior quote submissions about weed and vaping, nothing related to drugs is allowed.
“We always try to paint Branham in a positive light in the yearbook, so we try to never include anything about students or staff that could potentially backfire later on,” Tzou said.