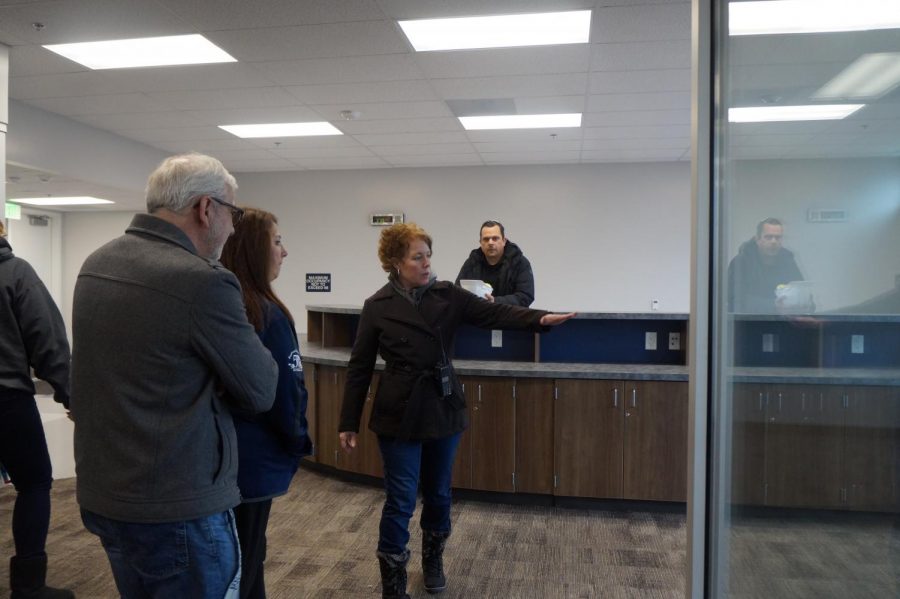 Principal Cheryl Lawton takes teachers on a tour of a finished campus building.

Math and English teachers were looking forward to moving into the new buildings during spring break, but school officials are saying PG&E is getting in the way.

They say that the utility company has not moved a gas pipe that was mapped incorrectly, a problem that builders identified in December 2017. Additionally, the completed building does not have a permanent power source, another source of frustration as it prevents teachers from moving into their new classrooms.

Principal Cheryl Lawton said that a string of communication failures, no-shows and incomplete jobs from PG&E have hindered the progress of construction, estimated to cost the district more than $600,000.

“I’m frustrated.” Lawton said. “Honestly, the hardest part is that we have this brand-new building that’s done (but not ] yet usable).”

In December 2017, workers found a gas pipe about three feet over from where it had been indicated on the site map, putting it directly where the foundation of one of the new buildings is meant to go. PG&E has to move it to the correct location and connect it back to the rest of the campus before construction can continue on that building. However, nobody from PG&E arrived for an appointment scheduled over February break.

The district has submitted two applications to PG&E for work that PG&E needs to do on the site. The first application, submitted two years ago, was for a transformer to be installed. This job is still not on PG&E’s schedule to complete. The second, for the ground pipe to be fixed, was submitted a year ago. When workers from PG&E finally came in late March, they only fixed part of the pipe, but didn’t connect the buildings to power. Without power, the elevator in the nearly completed building can’t be inspected and teachers can’t move in.

These delays are causing the district money from costs such as extra spending on storage and portables. District banker Nancy Pfeiffer estimates these costs to be around $406,000 intangible costs and at least $200,000 in non-tangible costs, such as the time of everyone involved in the process. The district is currently filing a claim against PG&E for the tangible costs of the delay.

In a statement to the Bear Witness, PG&E said that the inspection process and heavy snowfall in the Sierra foothills have spread their resources thin, causing the delay. Fiona Chen, a PG&E spokesperson, also promised that the company will communicate with Branham and finish the remaining 25% of the gas pipe project when a new meter arrives in April. The email stated that there is a contractor with whom Branham officials have always had the option to communicate.

Pfeiffer disputes PG&E’s claims that their lines of communication were readily available since the company has not solved these ongoing issues.

“Unfortunately, the application that’s the longest, the one for the generator, is two years old,” she said of their reasons for their delays. “So the things they’re mentioning are recent, but what happened with the first year that we submitted our application?”

English teacher Melanie Vega started teaching at Branham as construction began. She echoes the same concerns other teachers have shared, but is willing to put up with the delays for the long-term benefit.