March For Our Lives strives for legislative action 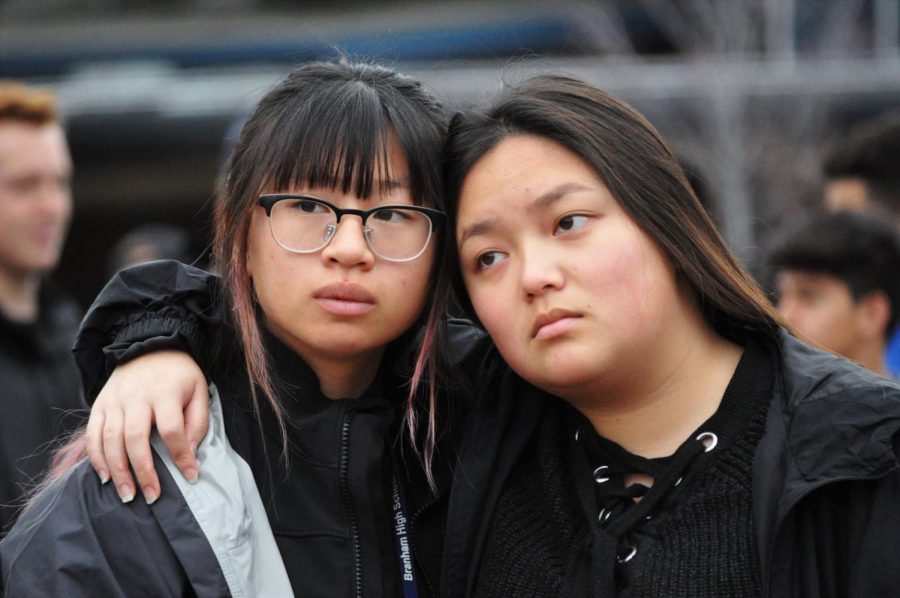 Regine Quintos/Bear Witness file Aivy Dang and Isabelle Trinch embrace outside in the quad, urging for gun reform in the U.S. Last year students participated in a walk out as part of the March for Our Lives campaign.

One year ago today, a shooter walked onto the campus of Marjory Stoneman Douglas High School in Florida and killed 17 people.
This tragedy sparked the formation of March for Our Lives, the largest youth-led movement since the Vietnam War. The group launched its gun safety march the following month, with rallies across the country, including San Jose, which attracted thousands of protesters.
In the year since the shooting, members of March for Our Lives San Jose focused on local issues, including the prohibiting of the sale and possession of firearms on Santa Clara property. At Branham, more security measures have been implemented, such as monthly run-hide-defend drills and the installation of wrought-iron fencing on the school perimeter.
Hundreds at Branham, led by seniors Danika Cho and Hana Tzou, joined 2,600 schools nationwide in organizing a walkout last year, intended to honor the lives of those lost.
This year, the organization plans to continue its momentum by helping students organize another walkout, planned for March 14.
Current lead coordinator of MFOL San Jose Benjamin Nikitin said that youth involvement is important to keep students informed. Leaders said that the attention of the movement has shifted to placing responsibility on adults.
“We’re hoping that through our walkout and through a rally we’re able to regalvanize them,” the Westmont senior said.
Bringing youth back into the movement and keeping gun reform at the forefront are important goals for this organization, as they are seeking long term legislation change.
Cho, the Branham senior and logistics coordinator of the local chapter, says it takes work to maintain momentum.
As logistics coordinator, Cho is in charge of obtaining city permits and contacting local city officials for the planned rally March 24.
The continued efforts for MFOL San Jose this past year included lobbying as well as planning for future events. The group cites the success of the local gun show ban among its successes, along with other constituents. The organization felt that this was a significant accomplishment because their work had an impact on legislation.
“I have nothing against saying I am for gun control,” said Julie Son, Prospect High School senior and MFOL lead coordinator. “I am all for that kind of action but there should be legislative action as well.”
The movement continues to be involved with events that promote different types of advocacy related to guns, not just gun violence. On Saturday, the group attended a firearms summit, whose aim is to advocate for safe gun storage.
“There’s no reason whether or not you do support gun usage recreationally for there not to be safe storage,” said Son.
Additionally, on March 30, the organization will participate in Rally for Change: Youth Voices are the Future event in Downtown San Jose. This event not only focuses on gun reform, but on advocacy for progressive movements in general.
The safety movement has gained the support of adults and school administrators, including Principal Cheryl Lawton, who said that she supports dialogue to promote school safety.
Lawton said that increased security measures have improved the safety of students on campus. Along with the fence around the perimeter of the school, more cameras were also installed.
“The security fences have shown to help lower incidents on campuses,” she said.
Lawton also says that an important part of school security comes from the students. If a student sees something or suspects that something is going on, it is important for them to speak up.
Son said that students need to be comfortable speaking up and have a safe space to do so.
Despite the increased campus safety measures, the MFOL leaders said that in order to create real change, their work has gone beyond rallies to creating lasting changes through legislation.