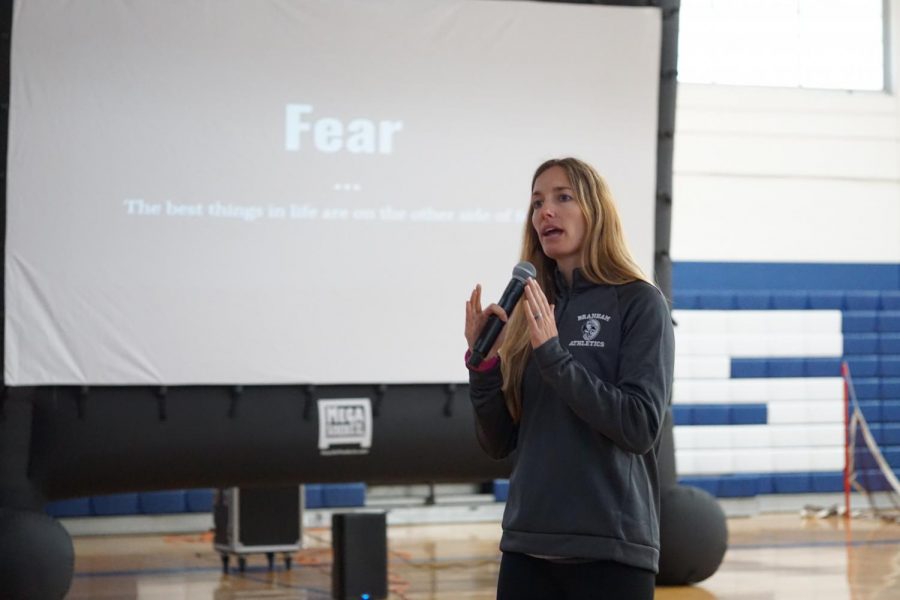 Photo: Sarah Sabawi Saying that the best things in life are on the other side of fear, weight training and P.E. teacher Christie Henebry encouraged seniors to face their own fears in order to achieve their goals on Jan. 31. It was the second class-specific What’s Your Why? of the year. The aim of the campaign is for students to find their purpose, personally and scholastically.

P.E. teacher Christine Henebry has been asked this numerous time since the start of the school’s What’s Your Why? campaign earlier this year.

She has received messages of confusion, gratitude, criticism and apathy from students, reflecting a student body with a mixed perception of the campaign and the data supports the feedback.

The goal of the campaign is to help students set and achieve their goals. To promote it, Henebry has held two rallies for each class, as well as professional development sessions for teachers. Additionally, every student and teacher has received T-shirts.

Student sentiments about the schoolwide campaign have been mixed. In a Bear Witness survey of more than 1,100 students, 34 percent of students thought the campaign has been effective thus far, 37 percent disagreed and 29 percent had no opinion.

Henebry, however, considers the program a success so far.

“I’ve received a lot of email support from students who I have never met face to face, who have either asked questions or said something positive about the experience,” she said. “And I’ve also had kids approached me on campus who I have never met before, who come up to have a conversation and share with me.”

The practice of sharing student whys has been at Branham started with Henebry’s weight training class. Henebry shared with her students her troubled childhood where she fled an abusive father and faced financial troubles. Strength from her mother and support from her teachers during this time inspired her to push herself.

Last spring, Henebry approached Principal Cheryl Lawton to expand this campaign schoolwide with faculty and staff behind her.

“I think we have a staff collectively — teachers, administrators, secretaries, janitors…everyone is on board with this,” Henebry said.
While many students have found her story inspiring, others have criticized the campaign as it continues, with the third why rally held in January.

Henebry has been praised by her colleagues and students for the impacts of the campaign. Some feel more connected to their teachers, and others have noticed a significant boost in motivation.

For students like sophomore Bennett Rothman, the rallies have been a useful tool in their own lives.

“They are helpful to be able to realize what you want and help you get out of a cloud of bad practices and habits,” Rothman said.

Students like these encourage their peers to listen to the message of the campaign they might be missing. However, those who have been touched by the campaign have noticed some students “don’t take the rallies seriously” and “are not acting on important lessons Coach Henebry is giving,” according to student responses from the survey.

According to survey, many students haven’t found their why yet, nor have they developed a sense of self, and therefore, a sense of purpose.

“As a freshman, I am more focused on just getting through the year and figuring out who I am,” one student wrote on the survey. “If I don’t know who I am, I can’t know my why, so it isn’t meaningful to me.”

Others have cited the campaign as “stressful” and “existential crisis-inducing,” because they feel pressure to find their whys. They aren’t alone; in fact, many students mentioned in the survey or have told Henebry that they don’t have a why, even if they may not bring it up during advisory.

Henebry feels that this is normal and that finding your why is a process, and that’s OK.

“Sometimes it takes people a long time to discover what their why is,” she said. “But that doesn’t mean that you can’t still have those dreams and goals and work towards achieving those things.”

Another concern students have is that their whys may not be as deep or meaningful as their peers’. Not all students have dealt with traumatic events in their lives, the same events that inspire many whys.

“The What’s Your Why? campaign is helpful for some struggling students, but useless to others that don’t have a bad background to draw motivation from,” another student said in the survey. “That sounds bad, but I just mean for me and others I’ve talked to, we don’t have a ‘meaningful story’ to pull from.”

Henebry understands that not all students’ whys are as “deep,” and aren’t going to “tug at the soul.” That isn’t the important part for her, however. What matters most is that students are motivated and succeeding, no matter what their why may be.

In fact, Henebry believes the most powerful part of a why is the fact that every why is unique and important to its owner.

“I say to students, never compare your why to other students, because your why is your own,” Henebry said. “If it is important to you, then it is the proper why.”

Students have also suggested that the program should move away from larger rallies into smaller groups.

In spite of the momentum, junior Paige Knudsen said that the rallies feel impersonal and are affecting how the campaign is being perceived.

“In general, the program might have been more effective if it was done in small groups and not as the whole school,” Knudsen said. “I believe that it lost some of its meaning because it was a large scale operation.”

This shift to more intimate talks has already begun to happen, as the first What’s Your Why? rally included the whole school, but the second and third rallies were divided by class. In Link Crew, where upperclassmen mentor freshmen during advisory periods, leaders led a session in which students talked about facing their fears.

Henebry also wants to have smaller groups for the why activities because she believes intimacy plays a huge role in the success of the message.

“With smaller groups, [students] do have a better understanding of what their why is,” she said. “They also understand that there are people on this campus who care and that it isn’t always about the academics.”

Some students with mental illness have said they also felt isolated by the campaign. For students with depression, in particular, motivation and reward functions in the brain do not operate in the same way as those without mental illness. Motivational speaking and goal-setting can potentially aggravate these issues.

“Students with mental health issues do not remotely benefit and can be discouraged by What’s Your Why?,” said senior Darby Cable.

“I’d tell those students, find your true happiness and whatever that looks like for you,” she said. “Even through the struggles, if you know what makes you happy, and you find those passions in life, even in your darkest times, it can help pull you out of it.”

Henebry supports students voicing their concerns and wants them to continue to do so.

“My hope is just that students who don’t feel connected to this campaign or program that they would ask the questions or express themselves,” she said. “I think that is a big part of this process.”

Despite the criticisms, Henebry has been praised by her colleagues and students for the impacts of the campaign. Some feel more connected to their teachers, and others have noticed a significant boost in motivation.

“I wish my class would be more understanding of the real impact understanding your own why can do to improve your lifestyle,” said sophomore Angela Nakao.

Henebry wants students to know there is always a staff member to support every student in pursuing their dreams.

“I hope that this is impacting students in a positive way,” said Henebry. “I hope if anything else resonates in this, it’s that anything is possible and that you are capable of anything.”