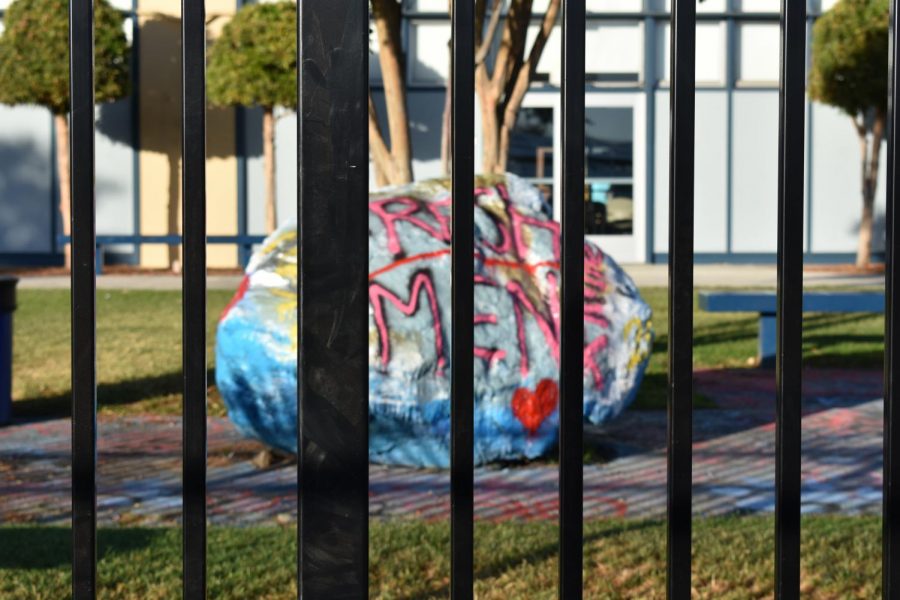 The "Rock" at Branham has been enclosed by the construction of the security fence.

A string of unrelated incidents in the past month has raised questions about Branham’s security measures, from the benefits of iron fencing to its response to online threats.

As the installation of the safety fence that has cost the district an estimated $906,000 nears completion, several reported incidents occurred within the span of 10 days.

Administrators were made aware of a threat towards the school in an Instagram post in the morning. According to administration, this threat was made because one student dared another to threaten the school.
Later on Nov. 5, a student from another school came on campus and “acted aggressively toward administration who tried to stop him” according to Principal Cheryl Lawton in an email to parents and students. During this time, a “stay in place” protocol was enacted. Police were involved in both incidents.

Branham and other schools have seen “a rash of bike thefts over the past few months,” according to Lawton in an email after a bike theft. Upgraded security cameras costing $245,000, including those near the bike cage, provided images of the perpetrators.

Another threat was made to the school through social media, but like the previous online threat was later discovered to be innocuous. It took several hours before the incident was reported to administration and the police were notified. Lawton said that the student had wanted to see how long it would take before administrators took action.

A student reported seeing a man dressed in black and with a black backpack walk quickly onto campus when he noticed the gate was open. She notified her teacher and administration were quickly notified.

At the PTSA meeting the night of the Nov. 14 incident, multiple parents said they were concerned about the threats, bike thefts and unauthorized people on campus, including PTSA board member Kenji Miller.

He raised questions about the effectiveness of the fence and whether it would be a hindrance in emergency situations because of limited exit points.

Lawton said that the location of gates was determined by flow of traffic and is designed for the campus after construction, which is why some locations seem unusual.

The student who first reported the Nov. 14 social media threat, who wishes to remain anonymous, said she was surprised that no one had reported it previously and felt unsafe.

“I didn’t want other people to feel unsafe,” she said. “That’s what kind of led me to email her and be like, this might happen, even though I didn’t know anything.”

At the same time, the student said that students might not have reported the comment because threats toward schools have become part of the this  culture.

“It’s normalized, but it shouldn’t be that way,” she said.

According to Lawton, if students see social media or in person threats, they should immediately contact administration, teachers or the police at the non-emergency number.

At school, students are encouraged to report threats to an immediate nearby authority figure.

Senior Monique Lopez, the student who reported the man in black on campus, described the feeling of unease at the end of sixth period in her Spanish teacher Leticia Molina’s class.

“It was very tense,” she said. “We were all frightened, we are all vulnerable because we didn’t know what would happen.”

Lopez said that with the frequency of unauthorized people on campus, the fences are not serving their intended purpose.

“We’ve been shown twice in the past two weeks that we’re not really safe,” Lopez said.

In response to the concerns about these incidents, Lawton says this will be solved after construction is complete when only the gate near the main office will be open.

“Until the construction is complete, the campus will not be entirely secure during the day,” she said in an email to the Bear Witness. “Due to the current location of the main office and portables, as well as pool and softball dugout construction, some gates are going to be left open most of the day.”
Lawton has acknowledged these doubts, but feels that the school is responsible for doing as much as they can, in this case implementing as many deterrents for intruders as possible.

“Security fencing, although not a perfect barrier, does provide enough of a deterrent to keep most people from accessing the campus except for through designated areas,” she said in the same email. “Sadly, nothing will ever be perfect. People who are determined to do bad things will still seek ways to do bad things, regardless of safety measures.”