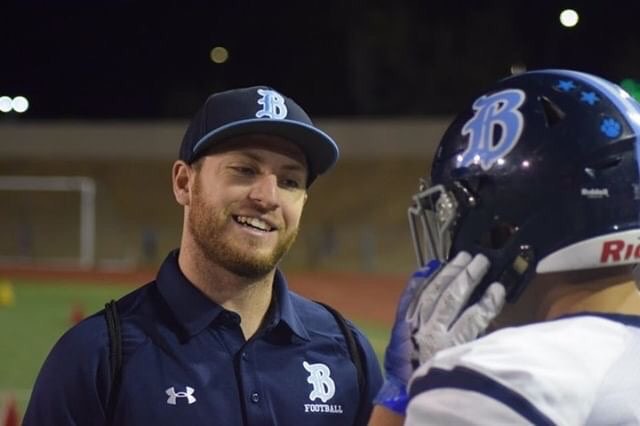 According to assistant coach Tommy McMahon, the 2018 season has been a "learning experience" for the Bruins, as they failed to qualify for the CCS playoffs

As the seconds ticked off in their rivalry game against Leigh, players, coaches, and students alike rejoiced in Branham’s football team’s first victory over their archrival in three years.
Unfortunately, this feeling has only come few and far between, as the victory over their archrival was their first league victory in five games under new head coach Stephen Johnson and his staff. This year’s team, one of the youngest in the Santa Teresa league, has had their fair share of bad breaks, losing their first four league games, all against CCS-ranked teams, while also being outscored 124-24 during that stretch.
This season was always targeted by the athletic department and the coaching staff as a rebuilding year, as a complete culture change in the program was likely to lead to a down year. Johnson sees this season as the first of a long-term task, looking towards the future of this team with a core of young talent.
“I want to believe it’s a 2-3 year project, in terms of that freshmen class that’s here right now, when they get to me as seniors, that’s when this will truly be my program,” says Johnson, who has only previously worked as an assistant coach. “All I can do is take it year by year, put forth the best effort I can, go through the checklist on how I can get this program better than it was the year before…”
Johnson and assistant coach/offensive coordinator Tommy McMahon view the younger players- the bulk of their roster being juniors- as a part of the fractured staff that is in charge of the team this year, as a late start to their hiring process hindered their ability to form a full staff before preseason preparations and the regular season began.
McMahon calls this season a “learning experience” for both coaches and players, starting a sophomore quarterback, Nick Bandanza, and other young players at key positions in order to get the valuable experience that will benefit them for the coming years. This sacrifice has left the team in a tough position throughout the season, acquiescing to the bigger, more experienced lineups they have faced in the first half of the season.
Bandanza, who was pulled up from Branham’s JV team to start at quarterback, can attest to the vast differences between the level of intensity in JV and varsity, finding the game speed and room for error to be more demanding this year.
“In JV, you have a little more time with the football when you’re passing, and in varsity windows get tighter and linemen get faster,” says Bandanza. “You can’t just outrun the linemen to the sideline; you have to calculate every move. In JV you could go out and wing it and get away with it.”
Bandanza also credits the coaching staff in helping adjust his game and mindset for a varsity atmosphere, often taking off days and weekends to improve upon various facets of his skillset and approach to the game.
“Over the offseason Coach T [McMahon] and I used to go out every Sunday and work on my form and ball placement. It’s helped me with my reads, so when I’m out there I know what’s going on and I know what the defense is mostly going to do.”
Johnson concedes the credit to the young group of leaders, who help him and his staff connect with the other players, speaking up during team meetings as well as during crucial moments during games.
“Guys who do speak up and talk are juniors, the juniors who are the most vocal and really give the passion and devotion to the guys when they speak,” Johnson says. “They echo our core messages that we’re trying to get through to the team on a day-to-day basis, like staying positive, picking your teammates up, playing four quarters, being physical; but they also put their own sort of spin on how thoughts are conveyed.
“What it comes down to is: we’re still learning how these guys are motivated… We’re still figuring that out as a young coaching staff, but also as a young team with mostly juniors, and some sophomores.”
The staff has had to fend off pressure from those surrounding the program pushing for immediate results, as they have run into common problems first-year staffs: low winning percentages, scoring, and matchup ability.
“Everyone wants to win now. We’re a young, very small coaching staff in addition to that,” says Johnson. “People want results now. They’re trying to buy in to what you’re selling compared to what it’s been in past years, but if we’re not winning now, people start to question things.”
Bandanza, who is expected to become the leader of this team in the coming years, sees the plan as achievable if everyone in the program buys in to what the coaches believe will help them accomplish their bigger, long-term goals, such as winning league and competing for CCS championships.
“We have the right foundation set by our coaching staff, the right ideas on how we should conduct ourselves, how we should do everything,” says Bandanza. “By the time I’m a senior, there will be a lot of fresh blood on varsity, but I don’t see why we won’t be able to win ball games.
“We have the right foundation, the right people in place, and I think if everybody buys in we can win a lot.”