Fresh face in the race

If elected, Branham alumnus, 22, would be youngest to serve on school board 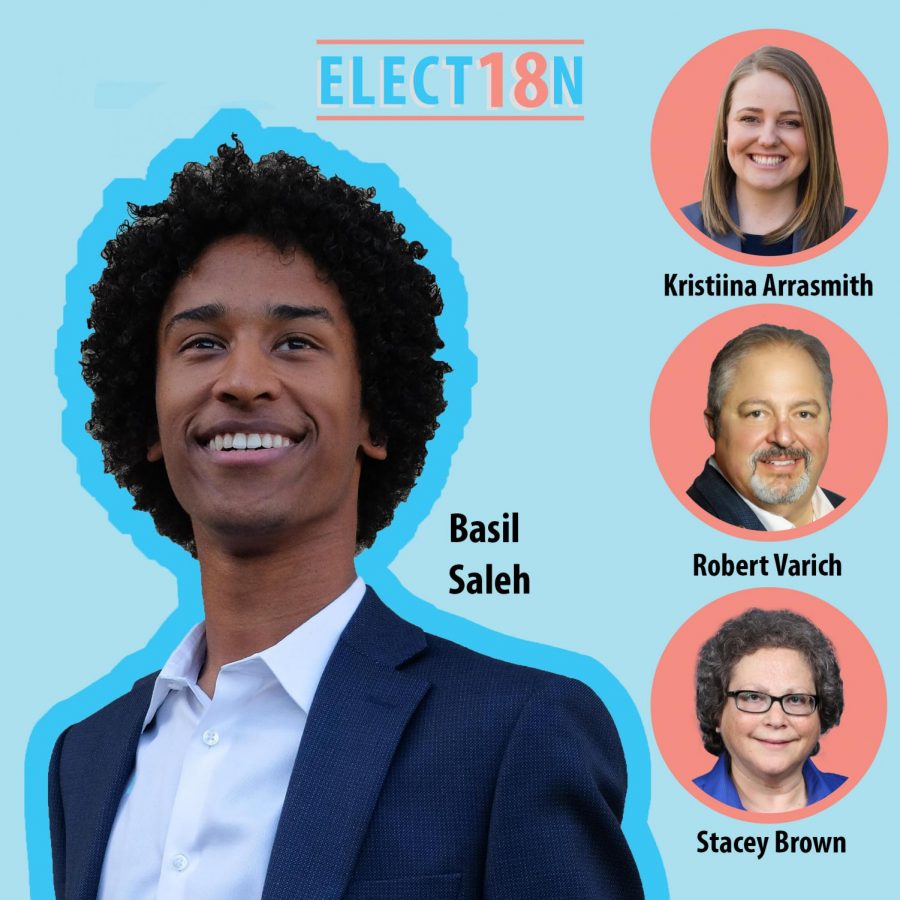 Editors Note: After concern from administration, it’s important to distinguish why the coverage of the CUHSD board elections has such a strong focus on Basil Saleh. The Bear Witness is not endorsing any candidate, only intending to educate the community. Saleh has had more coverage, but this is simply because of the extraneous circumstances of his campaign. Such a young candidate who is a recent Branham alumnus is unheard of. Saleh would also be a black man on a school board that has been historically white.

To get his ballot statement up to run for the CUHSD school board, Basil Saleh had to take out another loan help pay the $4,250 fee it takes to run, on top of his debt from college.
As a newly minted college grad, Saleh is unique among the other four candidates vying for the three spots on the district board. At only 22 years old, he’s most likely the youngest candidate the district’s ever seen, and one of the few people of color who have run for a historically white district board.
Saleh said he’s running in the hopes of making the experiences of students of color in high school better and creating a space in Cambrian for young people to build a sense of community. His platform also consists of ensuring arts funding, supporting teachers and addressing mental health.
A Branham alumnus, class of 2014, Saleh attended the University of San Francisco and majored in Media Communications.
He had worked in the music industry as the co-founder of the Bay Area rock group No Vacation (a video of theirs reached 3.5 million views on YouTube) and social media manager at Bay Area record label Father Daughter Records, until the devastating Ghost Ship warehouse fire in 2016 that killed 36 people.
Being a creative in the Bay Area and knowing several people who died in the fire, he saw how Oakland responded to the tragedy and was displeased. Lack of affordable housing, which forced many to live in unsafe conditions, was the root cause of the accident, he said, but city officials instead focused on fire safety.
“I decided to switch careers, to switch gears and take my knowledge and apply it to the policy because I saw the damage reactionary policy takes,” he said.

Friend’s arrest opened his eyes
As for any candidate, there are multiple reasons why Saleh is running. One was the January arrest of Jared McEssy, a high school friend who had supported Saleh as a freshman when he was physically bullied based on his race.
McEssy had a difficult upbringing, had struggled in high school, and dropped out of community college, eventually turning to petty crimes. To Saleh, his friend was set up to fail.
“His arrest was connected to a larger narrative about the overall lack of resources and engagement,” said Saleh.
At Branham, Saleh struggled with what he saw was a negative school environment, and felt like an outcast in his first years of high school.
“There was a lot of on-campus fighting and machismo, but there was also a lot of racism that we had to endure day-to-day,” he said. “On multiple occasions, I just got tired of getting picked on with these racist comments. When I tried to stand up against one of them, I got hurt.”
Even when Saleh became class president his junior year and eventually his senior year, he still experienced racial bullying and was told by others, including his fellow students in the Leadership class, that he didn’t belong.
At a school board candidates forum on campus in early October, Saleh recalled these experiences and how they weren’t unique to him.
“My parents were called n***** in high school,” he said before an audience of about two dozen people. “In high school, I was called n*****. In high school, my brother was called n*****.”
During the same response, Saleh went over his allotted speaking time, ignoring the student moderator senior Danika Cho and standing.
“I think that was worth saying, and I think that was worth standing for,” he said. “Because if we don’t stand for it, we’re never going to see change.”
Later on, Saleh reflected on the difficulty of this moment.
“This is a hard place to have any sort of honest discussion about race because the moment you bring it up, you’re making statements about people’s characters,” he said of people who view him speaking out against systemic racism as a personal attack. “It’s uncomfortable. It wasn’t necessarily uncomfortable for me. What was uncomfortable for me was not being able to talk about these things before.”
In his short career in policy, Saleh has touched on varied sectors from tenants’ rights to water access. He started as a policy intern in 2017 under the office of San Francisco supervisor Aaron Peskin. Early this year he worked as tenants’ rights lobbying fellow. He recently worked as an intern with the Santa Clara Valley Water District.
When he moved back to San Jose and decided to run for the trustee position, he felt the need to expand his knowledge of this district, beyond being an alumnus.

Former teacher encouraged him to enter
Since announcing his candidacy, he’s been working to increase his visibility, attending board meetings, campus events throughout the district, and familiarizing himself with the district budget.
He’s also held his own events such as “San Jomecoming” which showcased student art in the district and “Boba and canvassing,” an event meant to engage volunteers for door-to-door campaigning.
All of this might not have happened if he didn’t come to visit his AP U.S. History teacher Brett Johanson, whom he credits for getting him to run.
Recalling the visit, Johanson said that he saw Saleh’s desire to run, but felt that he needed “not necessarily a shove, but some added encouragement.”
“I know that sometimes we have big ideas, if you want to do things that make you step out of out of your comfort zone, that make you a little nervous, you talk about it and you’re hesitant to do it until someone gives you a push.”
Following the meeting, Johanson got him in touch with people in the district who helped him through the official filing process.
His campaign was no surprise to his younger brother, a self-described evangelist for the campaign.
“He has that natural leadership quality about him,” said Adam Saleh, a recent Branham graduate. “It was inevitable that he was going to run for something.”
Johanson felt that Basil Saleh would be an apt candidate because of his experience with Basil and his integrity.
“He has a thoughtful and reflective decision-making process,” said Johanson, “If he came back with bad news, like something with our salary, I would completely trust that he had gone through a process that was filled with integrity.”
Similarly, his campaign manager Elisheva Basseri, who runs Basil Saleh’s campaign team of six, joined because she felt Saleh to be authentic.
“Bas really spoke to me both personally as mom and a citizen,” she said, “and I actually signed on to help him before I realized that I was in his district.”
She said her children, now in elementary school. will soon attend Branham, and to her, Saleh represents true diversity, not just “some buzzword.”
“What I hope will be waiting for them, when they get to that age,” she said, “is a campus that is able to keep up with the pace and culture of the Bay Area.”

‘A fresh perspective’
Johanson thinks that Basil Saleh is the type of person who will be able to effect these changes.
“He’s always had a fresh perspective, even back when he was a student of mine. He’s always been great with working with different types of people and I know Basil would sit down and listen and talk to everybody, no matter what their viewpoint is.”
Adam Saleh also believes that his brother has a fresh perspective.
“I think that one of the most important things about him running is how fresh ideas are because obviously his demographic is closer temporally to students and he’s also Gen Z,” said Adam Saleh.
Looking ahead to election day, Saleh knows he has a likely chance of getting the seat – the four candidates are vying for three open seats. But if he doesn’t win, he isn’t planning on running again.
“We’re not assuming that anything is a given,” he said, “even though we took all the right steps along the way.”