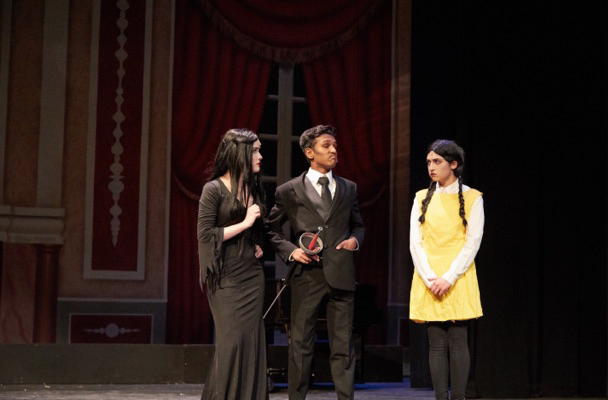 Funny, full of adult humor, packed with talent and most importantly entertaining, “The Addams Family” was one of the best musicals Branham has put on in recent years.

One of the best aspects of “The Addams Family” production is that it went places many high school performers are afraid to go. It got political when it mentioned the importance of Ohio being a swing state, and even when questioning whether President Donald Trump is fit for the presidency.

The show was laced with innuendos and even more brazen references to sex. Whether that be when Gomez Addams (junior Savidu Geervaratne), tells Morticia Addams, played by junior Caroline Ware, that he has a “sudden urge to take you in my arms” or when Alice Beineke, played by (senior Evie Sanders), says “Parents do it, too!” Political and sexual, this show crosses lines in the best way possible.

Another shining aspect of the performance was the dancing, which can be attributed to the assistant director and choreographer, senior Kristen Williams who also played the role of Grandma Addams. The intricate dance numbers added to the quirky quality of the music.

Other standouts include sophomore Julia Bozzo who played Wednesday Addams. She stayed in character in every scene and impressed the crowd with her vocal talents and dedication to her character. Additionally, freshman Jack Swartz played Uncle Fester convincingly well. Bald cap and all, he made the audience believe that Fester really was in love with the moon.

Pugsley Addams was another character, played by freshman Scott Tucker. He strongly conveyed that Pugsley is a masochist and will definitely miss his sister torturing him if she ends up getting married and running away.

It was difficult to find any flaws in this production, even when searching for them. However, there was one technical issue. Morticia’s mic cut out a few times during one number. Besides that, the sold-out crowd loved the show and all it had to offer.